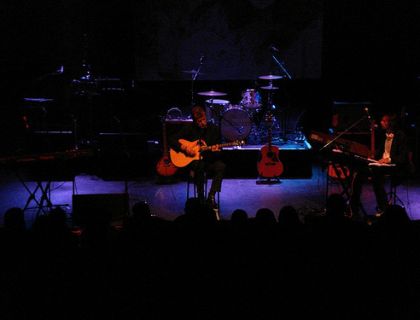 Here at Elefant we are continuing our unrelenting mission to rescue material by the distinguished Nick Garrie, and if we spoke about a new single for “Can I Stay With You” a few weeks ago, now the time for “Wheel of Fortune” has arrived in this very special moment for the author of “The Nightmare of JB Stanislas”.

This coming Saturday, June 11th, as a part of the British festival Doune The Rabbit Hole, Garrie will be performing his admired debut album in its entirety, accompanied by Mike Heron of THE INCREDIBLE STRING BAND and members of the British band TREMBLING BELLS, the psychedelic pop band led by Alex Neilson, with a line-up that will include string instruments, wind instruments and a rhythm section, in order to make the songs shine as much as possible with the arrangements that Eddie Vartan imagined them with in 1969. Without a doubt, this is an incredible and unique opportunity that will also have great festival-mates like THE VASELINES, TREMBLING BELLS, BMX BANDITS, Ally Kerr and Alasdair Roberts.

But that’s not all, because a curious and attractive deal has just been announced for this coming Christmas. Under the title “The Nick Garrie Gig Pass Christmas 2011” our star will give four concerts in the ski slopes of the Swiss city Gstaad, as well as the opportunity to ski with the man himself (there is a legend that says that Nick gave ski lessons to Paul McCartney himself on those very slopes). The first concert will take place on Wednesday, December 21st in the Hotel Alpine Lodge, where Garrie will perform “The Nightmare of JB Stanislas” in its entirety, accompanied only by his guitar. The following day he will play songs that he wrote with Francis Lai, which he played with Cat Stevens’ band, and even some of the songs included on “49 Arlington Gardens”, over dinner in the Landhaus hotel in Saanen. Saturday the 24th, there will be a very special Christmas concert in which Garrie will be accompanied by a children’s chorus in the Hotel Gstaaderhof, while on the 25th he will adorn lunch with various songs from his complete repertoire in the Chemistube in St. Stefan. You don’t need to know how to ski to enjoy an event as incredible as this.

And because of all of this, we are making special mention of the release of the digital single for “Wheel of Fortune”, which includes a previously unreleased track, “The Bath and Mrs. Brown”, recorded in Glasgow with the same musicians who recorded THE CUTS for the re-release of “Stanislas” (captained by the perennial Duglas T. Stewart), inspired by a song by France’s Pierre Perret. In addition, the single includes two songs, two re-recordings from a session in Portugal in 2002 of songs that were released on “Stanislas” and to which a curious twist is given: “Deeper Tones of Blue” acquired intensity in this acoustic, raw version and “Bungles Tours” breaks all the boundaries when it goes off-course, halfway through the recording, towards Caribbean sounds that give a new light to a song that was already incredible in its previous format. You can find this single on the most important digital platforms.

And now, more than ever, Nick Garrie’s fans are celebrating.